February 2018
Student of the Month 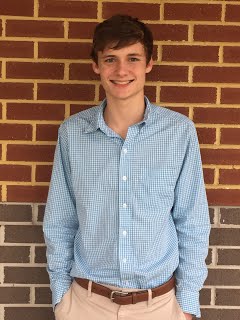 Brunswick Academy is pleased to announce that John Powers Edmunds, Jr. has been chosen the February 2018 Student of the Month. Jay, a senior is the son of John and Michelle Edmunds of McKenney. Jay has one brother, Vincent also a student at Brunswick Academy. Jay is a member of the National Honor Society, Latin Club (Philanthropic Co–Chair), and has attended Model General Assembly. He has held leadership positions in the Class of 2018 as Treasurer and is currently Senior Trip Treasurer. He been a member of the Brunswick Academy Theatre Tech Crew and Student Council Organization. Jay is a three sport athlete. He has been a member of the Brunswick Academy Cross Country, Basketball and Baseball teams. He has been a captain of both the JV and Varsity Basketball and Baseball teams. He was awarded the “Sportsmanship Award” and “Most Improved Player” award on the baseball team. Jay has also played travel Basketball and Baseball for many years. In his spare time, he enjoys bowling and the beach. He would like to study Civil Engineering. He attended the ENVISION program at Georgia Institute of Technology. This is a summer leadership program for potential engineering students. He has applied to James Madison University, Christopher Newport University and The University of Virginia.